Neil Young – The needle and the damage done

For no reason in particular I have been listening to Neil Young all day. He is such a beast! What an amazing back catalogue he has. His voice is so affecting; wistful and fragile it adds so much to his music. When I am searching for something mellow he is always near the top of my list.

The Temptations – Ain’t too proud to beg

I was out for dinner at an excellent new restaurant on Saturday night. If you ever find yourself around Carnaby Street I would highly recommend it. Not only were they serving up some choice Barbeque food but there were also playing some choice Soul music. This is just one example of many. Great, classic Motown tune.
RjK

Sunderland band Field Music aren’t one I know much about. I heard them recently and really enjoyed this. It is nice and relaxed and has a killer bass. It reminds me a little of My Morning Jacket, which is a very good thing.

Shoegaze is a sub genre of rock from the early 90’s, in which vocals play second fiddle to melodies which were made on heavily distorted or effected guitars. The name partially comes from the fact that when performed live the guitarists in the bands spent all their time looking at the floor so that they could mess around with the different effects that they were using. The music produced by shoegaze bands was seen as being self-indulgent by many, which to be fair  is understandable and it is not a style of music that everyone will like.

Another name used by some of its detractors was the scene which celebrates itself, as the bands who made up the scene were friendly with each other and would often go to each others gigs. I’m not too sure why that was seen as a bad thing, but I guess the music journalists at the time, wanted something else to write about besides the music, hence the relish with which the Oasis vs Blur saga was reported on.When grunge and britpop increased in popularity, these became the de facto styles that all rock bands had to play and so shoegaze music was quickly ignored.Two of the most famous bands which were of the shoe gaze genre are My Bloody Valentine, who I have guest posted before, and Ride whose album Nowhere, and the track Vapour Trail especially, is highly regarded.

Having mentioned both of those bands, the song that I have chosen is from the album Souvlaki by the band Slowdive, and the track is called Souvlaki Space Station, which I see as an archetypal shoegaze track, i.e. guitars with heavy effects and difficult to hear vocals which contribute to the melody rather than stand out from it.

This is a favourite from Manchester heroes Doves. It is taken from Some Cities, which I listened to endlessly while I was at university. I love the sound – expansive and soaring.

I had the good fortune to see these guys live a few times and have never been disappointed. If you get the chance I would highly recommend it. The put on a great show both visually and sonically.

Tonight’s post is something akin to live blogging. I am just home from a convivial evening with a good friend celebrating the fact that he had avoided deportation. This was on the stereo in one of the bars we stumbled across. I had forgotten how fun it is – 3 minutes of pop perfection with a spirited video to match (look closely here to spot a very young Fatboy Slim).

My normally photographic memory for where I first heard a song has failed me in this instance. I found a note I had made myself to revisit it earlier this week and was glad I did. Where and when I made that note, who knows?

I know virtually nothing about these guys apart from the fact this is spellbinding. It has an otherworldly sound with a pretty interesting video here to match.

Sharon Van Etten* – Give Out

Female singer-songwriters isn’t normally a genre that particularly get’s my heart racing. So this lady kind of snuck up on me. There is something heartfelt about this that has been speaking to me this week. I have been feeling a but unsettled of late which maybe has made me more receptive than normal or least that is what I am telling myself.

I have heard her played frequently on shows I have been listening to recently. This reminds me of Lana Del Rey before Christmas. Perhaps this means she is destined for big things too (i.e. overkill – I saw LDR on the side of a London bus this evening!).

Myself, Rob and Rory (with two brothers McDermott in tow) went to see Tune yards (I refuse to bring myself to spell them “tUnE-yArDs” without the use of copy and paste) in the Shepherd’s Bush Empire last Wednesday. Now, I don’t know half as much about music now as I did when I was 17, which effectively ruled out me having heard anything of note about these guys before, apart from the previous post,which I’d assumed involved a male singer. Turns out that the band is a rather zany interpretation of the adorably-cute-manic-pixie-dream-girl-front-woman trend in music. Comparing and contrasting Merrill Garbus (I just used Wikipedia) to the worryingly charming Lisa Hannigan could lead to an essay of its own. I’m very unclear as to which direction it would take but it sheds an interesting new light on the whole thing. I’m going to stop talking about Lisa now. But given this, the band is based around the inevitable female singer-songwriter on ukelele, but it also contains- and only contains – some pretty funky bass playing, and two saxophonists. Two of them, and noone else, apart somebody somewhere in the ether operating an 8 track that repeats some drum beats the ukelelist plays before the song proper starts. Naturally enough.

They weren’t bad. The show started with what could be best described as traditional African acapella doowopping, which would have been great on record, but seemed a bit contrived if nonetheless impressive from a white girl from New England. But the girl’s got a set of lungs on her, and a likeable, impressive attitude and the crowd was clearly getting into it quickly. (The same crowd incidentally was best described as very androgynous and off-puttingly younger than me). Garbus seemed at times to be a little unsure of herself dealing with the audience between songs but there was a sense of the euphoria of the new about the place, and it seemed clear that most of the crowd had spent a long time waiting for the chance to see them live; she got through this fine without anyone noticing and it was clear it was going down well enough. The Empire is an intimate enough venue too, so the band made a connection quickly.

The music itself was interesting too – combined with the band’s demeanour and occasional dance routine, they managed to pull off a high-energy, mellow vibe. Which in truth doesn’t make very much sense when spelled out like that, so that’s quite an achievement in itself. I enjoyed the night – the music was pleasant- but nonetheless I did feel that this might be a young man’s game. I’d happily see them again, I’d be happy to listen to them again, but for whatever reason the show didn’t connect with me in the same way I think. A worthwhile night out, and I can see why these young people like them, but I’m not getting carried away yet. 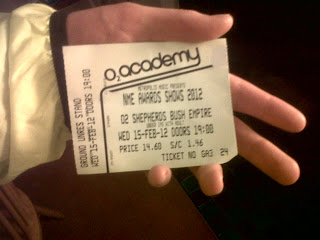 It has been too long since I posted some hip hop. NYC-rapper Roc Marciano is someone I came across relatively recently. What I really like about this is it’s old school vibe. It sounds as though it could have been recorded 15 years ago despite only being released in 2010.