I thought of this after posting Paul McCartney earlier in the week. It is a cover of one of my very favourite songs of all time, which I posted last year. Whilst this doesn’t quite hit the same heights and didn’t have the same impact upon me, the refrain of Blackbird (at approx. 4:30) really adds to this version.
Blackbirds singing in the dead of night…
It is taken from Fisherman’s Blues, which is a very enjoyable album with a stellar sleeve (see below). 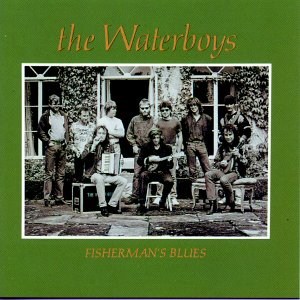 Foy Vance – Gabriel and the vagabond

I spent some time walking about Belfast this evening before meeting up with a good friend for a beer. I found myself lingering about Queen’s (my alma matter). It made me feel nostalgic for university days free from worries.

This means it feels right to post a favourite from that period. I listened to this song a lot both in Belfast and Berkeley. There is a piercing honesty to it which is quite affecting.

Thin Lizzy – Dancing in the moonlight

Happy St.Patrick’s day to you. I am off to watch England against Ireland at rugby today. Should be a fun time. I wanted to mark the occasion with something Irish. You don’t get Irish and much more fun than Thin Lizzy.

There is some solid sax on this track for what is ostensibly a rock song.

I have some old school friends coming down to London on Friday. We are going to watch the Ireland v England rugby match at Twickenham on Saturday. It should be a fun and raucous weekend, and not a little nostalgic. It is strange as my buddies are starting to become scarily grown up, not an affliction I am in any danger of suffering from myself!

Anyway, I thought I would post something that reminds me very vividly of my schooldays. Ash are also from Northern Ireland and 1977, the album this is taken from, was released when I had just started secondary school. It still sounds so urgent and youthful and full teen angst. Additionally, this song has a fabulous intro.

I’ve got some records on, some bottles of wine on a stormy night, the rain is lashing down and I’m waiting for her…

I could write extensively about Van Morrison and the impact his music has had upon my taste in music and life, but I will try to spare you the tedium. Long story short, I am something of a fan.

The reason for posting this is that my father is fortunate enough to be going to see Van the man play in Belfast on Friday night. I am fairly jealous.

Van is a remarkable live artist, possessing a rare ability to lead a band. Typically I find myself to be underwhelmed by live albums, feeling unsatisfying when comparing them to studio versions. This is why it is so strange that Van has made 3 live albums that beguile me (It’s too late to stop now, Live at the Grand Opera House Belfast and A night in San Francisco). I can only think of a couple of other live albums that I would even bother to give another listen yet I return to these three over and over. And over.

This is taken from Live at the Grand Opera House, Belfast, an LP that takes pride of place in my record collection. It is the best bits of several shows recorded in 1983. This particular song has taken on an almost mythical status in my life. I love the dreamy, meandering opening and then how the song suddenly shifts gears with the intorduction of saxophone (I am a sucker for some horns). From there it builds and builds to a crescendo with Morrison crying, exhorting with a tangible sense of urgency. All the while his band backs him immaculately giving the song a texture that I find irresistible.

Is it real? What you sang about in your song. I said come back baby. Can we talk it over one more time? Tonight…

My Bloody Valentine are well known for their brilliant yet divisive second album Loveless and the fact that the live performances of that album were so loud it was painful.

The first album that they made, Isn’t Anything, is less well known but well worth a listen. The track that I listen to most off that album is called Lose My Breath. I first became aware of this track through the Destiny’s Child cover, and I’ve been thankful to Beyonce et al ever since.

The contrast between the ominous guitar and drone at the beginning of the track and the soft female vocal is quite intriguing and the chorus (just the word oooo), is simply beautiful.

This probably isn’t a very apt song to post on a freezing, grey December day. However, the reason it has been on mind recently is that I was out for dinner a couple of weeks ago with a few Irish kids. As the conversation turned to music and home Tom Dunne came up. He used to present a show called Pet Sounds on Today FM that we all used to listen to religiously. This blast of welcome nostalgia got me thinking about all the music that I used to listen to as a naive teenager. Watch out for a few more tracks of this ilk before the year is out.

There is something real about his style (musical, not too sure about the dodgy fedora) and delivery that I can’t help but respond to, particularly in the the live setting.

Shed a little light so I can find you…

Roisin Murphy is the former lead singer of late 90’s and early 2000’s electro-pop darlings Moloko. She is slightly eccentric and richly talented, perhaps a little like an Irish Bjork. This is taken from her 2005 debut solo album Ruby Blue which was a massive favourite in my university days and used to get heavy play on my old radio show.

These guys are an Irish band with what I think to be a great name. They also have a solid sound, laid back and funky.

I particularly enjoy this track it and random video (Especially the dude fishing in the bathtub! That is the stuff hipster dreams are made of). It was a big favourite of mine when I was at university in Belfast and has remained so since.